A new report by OneClickRetail states that Amazon’s grocery sales exceeded $ 1.5bn in 2017. The report attributes much of the growth to Amazon’s June 2017 acquisition of Whole Foods Market. We would like to point out some other aspects of Amazon’s online grocery strategy in 2017, and the move from online-only to omni-channel in the last 2 years, resulting among other initiatives in the purchase of Whole Foods. 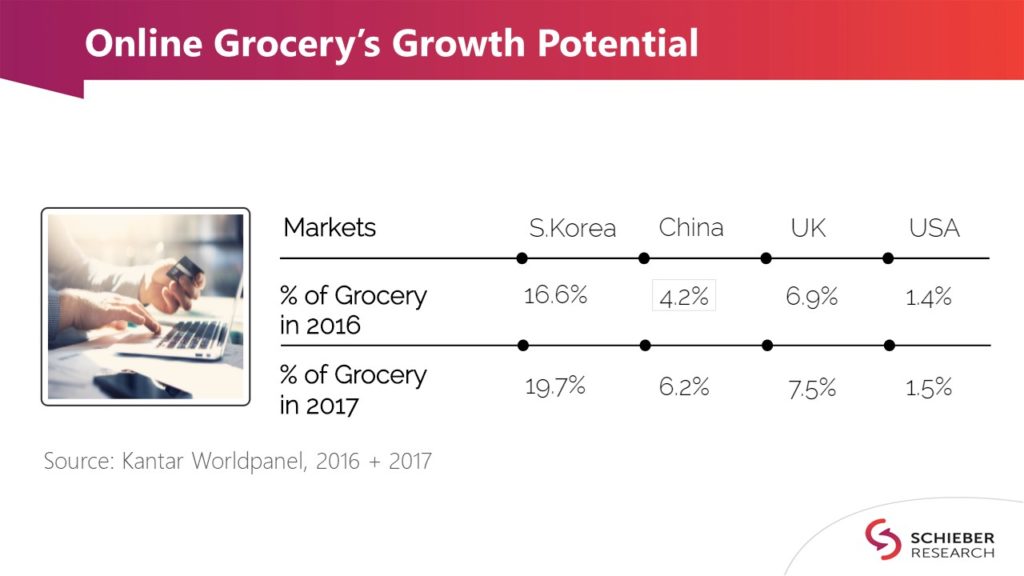 Amazon, who realized that this huge market is still untapped, started testing Fresh in 2007 in Seattle, trying to solve the logistical challenges which this new perishable concept created, finally launching at a bigger-scale in 2013. Since then, multiple delivery and fulfillment start ups have mushroomed, in an attempt to solve Last Mile problems, but Amazon continued transforming the industry, launching 2-day delivery, then 1-day delivery, and finally, 1 or 2 hour delivery in some areas.

But over the last 2 years, brick and mortar competitors (such as Kroger and Walmart) began offering online groceries with “click and collect” (or “buy online, pickup in store”) instead of delivery, thus saving money and possible time. Click and Collect, already vastly popular in Europe, combines the time-saving benefit of online shopping, with the ability to add items which are selected by the consumer (an important barrier in online grocery shopping; also see Carrefour Polska’s new retail concept integrating experience with pickup).

Therefore, the key in Amazon’s grocery endeavors is the platforms it can utilize to touch the consumer and weather the increasing competition, while growing the market.

The following timeline demonstrates how the Whole Foods acquisition was a natural part of the company’s platform building, which includes platforms that were not initially intended merely for food and beverages (but were utilized to include those – such as the “Treasure Truck” and the Dash button); brand building efforts (launching “Wickedly Prime”), and the curation platforms (the Sweet Surprise box subscription, as well as through lifestyle-targeting tactics). Other platforms were tailored specifically for quicker, cheaper fulfillment – “click and collect” grocery locations and an in-car delivery pilot. 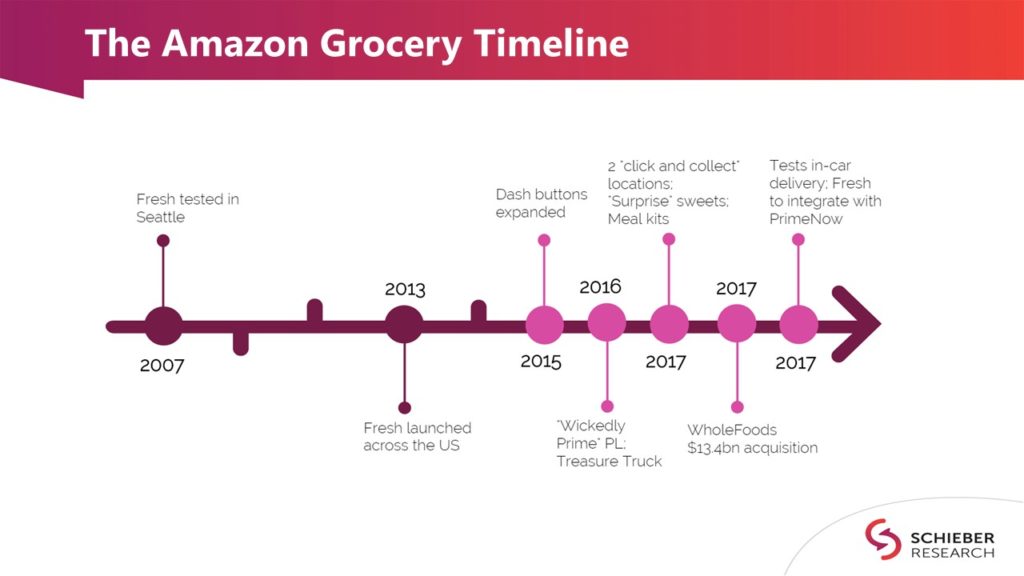 When looking at these platforms, it is clear that the company is attacking the grocery business from almost every possible angle. More examples include the Prime Sample platform, which already features food and beverage brands; and Amazon Prime Pantry’s bulk value proposition which is utilized for non-perishables The company might go on to integrate its “Amazon Go” technology in the Whole Foods stores, thus further affecting the grocery industry. And, as Amazon prepares for the future of grocery shopping, it is fair to assume that Alexa will be the next frontier, compelling F&B companies to design a voice search strategy.