Kate Klein, Isabella Moss, and Sidhi Binrani are brilliant high school seniors, currently interning at Schieber Research. As talented members of Generation Z (born after 1995), they opened my eyes to behaviors and trends that are not a part of my (old) Millennial world, and even inspired a whole new direction in my research and speech on The 3rd Wave of E-commerce, after introducing me to the new world of consumer-to-consumer digital commerce.

After all, a 2018 Girl Up survey found that only about 50 percent of Gen Z consumers think that celebrities are a trusted source of information, because they understand that influencers are getting paid. At the same time, however, many of the Gen Z most popular brands use influencers as their core marketing tactic; and 45% of consumers born after 1995 use Instagram for brand discovery.

What we discovered in our research was that influencers are very important for Gen Z consumers, but these consumers don’t take anything for granted – they research, double check, and compare information like the self-sufficient, self-taught people they are.

This is very much in line with what I learned from Isabella, Kate and Sidhi’s essays: these young women use influencers as a source for discovery – a suggestion – rather than as a seal of approval. And they use platforms to influence their friends – and be influenced by them. What’s more, I liked how they have a social media raison d’etre – they are not there by the power of inertia, they know what they are doing on the platform and why they are there.

I loved their fresh and perspective and well-written articles so much, that I wanted to share it with our followers.

Isabella Moss wrote about the platform she uses to influence her friends – Instagram – explaining her motivations in using this platform to influence and be influenced.

Kate Klein wrote about a YouTube influencer named Gretchen Geraghty – and why Kate perceives her as an authentic reviewer despite knowing she is paid to promote many brands.

Sidhi Birani wrote about an Instagram mega-influencer – Kylie Jenner – and why she likes her.

On October 6th, 2010, the Instagram iOS app was officially released through the App Store. As it began to soar in popularity, my friends began downloading the app and making accounts at just eleven years old, when we were in sixth grade. I felt compelled to hop on the trend, as I felt “out of the loop” when I wasn’t seeing my friends’ posts about where they were, what they were eating, and what they were doing. Since my mom was against the idea at first, I wanted to be involved in the trend so badly that I even kept my account a secret for a while (well, until I was caught).

Years and years have passed (six, to be exact), and Instagram has become a huge part of my life. Instead of using it to be a part of this worldwide “trend,” like I used to, I now use it to show people who I am, what my personality is, and how I live my life. I feel motivated to do so because right now is an extremely important time in my life; I am a senior in high school waiting to find out my college decisions. Oof.

And one might ask – What does that have to do with Instagram? Well, I can assure you that without Instagram, I wouldn’t be able to interact with others who get into the same college as me, or find a roommate like me, or connect with them half as easily. So when I decide on what college I am going to, like the rest of the high school seniors in the world, I want others to truly see who I am, what I believe in, how I spend my time, what type of people I hang out with, and most importantly – what my style is like.

Those who are going to the same college as me need to see these factors about my life so they can reach out if they feel as though we would get along. And the same goes for me – if I find someone who gives off the same “vibes” as me and looks like they live a similar life as me, I am going to reach out to them.

Although this is a big reason why my friends and I have become so invested in our Instagram platforms, there is a big, underlying (yet, silly) other reason – we just want to look “cool.” By having your instagram feed filled with color and friends and family and fun and activities and life, it seems as though you are one of the cool ones. Thus, I am cautious with what I post on Instagram, knowing that it will determine whether nine hundred and eleven people (my followers) think I am “cool” or not. So follow me – @bella.moss – and decide for yourself.

On my account, you will find lots of pictures of fun food, me with my friends, artsy photos, and inspirational quotes – which I believe help me rub off on others as a positive, fun, outgoing person. As for the quotes, I really hope that they influence others to be the best version of themselves. And as for the places I go to and post about, I believe that they influence others to go there and have fun as I did.

How I got to know her:

In freshman year, with the weight of colleges hearing about my grades and everything starting to affect my future, I wanted to learn more about the process. I began looking up different college videos on YouTube with the main category being freshman dorm tours. From there, I watched about 100 different videos, ranging in schools, and ranging in the creator’s’ personality type. One creator, however, stuck out to me. Her name was Gretchen Geraghty, and back then, she was known as GretchenLovesBeauty (GLB). Her bubbly and easygoing personality made her seem like someone I would be friends with. Through her vlog-style videos, I got to walk through her day-to-day life with her, getting to know her friends, boyfriends, and just the daily struggles of life in college. Over the course of the past four years, I have continued to watch her videos, keeping up with life and how it has progressed throughout her college experience. 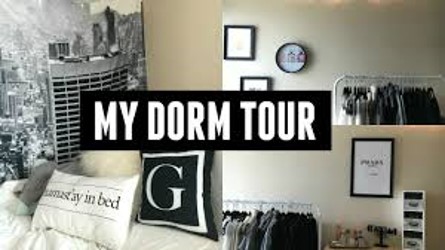 I like that she seems like a normal person. Although that may be weird to say, many of the big Instagram names, YouTubers, or even “normal” celebrities, are hard to relate to at times. With their huge vacations every other weekend, designer clothing and accessories, and other luxury items, I feel like they are just in a whole separate world than I am.

With Geraghty, I feel like she is very similar to me. She goes to class, has to struggle through homework and studying for tests, and has boy problems. This sense of relatability is what has made me continue watching her and taking her advice. She seems like less of a celebrity and more of a long-distance friend.

What I have bought:

After Geraghty promoted them in her videos, I have shopped at numerous different stores. I have picked up items from shirts to shoes to new makeup products and many more. Of course, I have been conscious of when she has been paid to promote a product, taking that into consideration on whether or not she truly likes it as much as she says she does, but in general, I have taken her opinion pretty highly. Out of the products I have purchased, I a high percentage of them I like and use/wear quite often, making me trust her opinion even more and continue to buy things she recommends.

Kylie Cosmetics by Kylie Jenner is one of the fastest growing beauty brands in the world and having launched three years ago, Kylie Cosmetics was put on the makeup map, by Kylie’s infamous “Lip Kit” consisting of a matched liquid lipstick and lip liner to create the perfect Kylie pout.

I got to know about Kylie in 2015 when she launched her own cosmetics line called Kylie Lip Kits, which was renamed to Kylie Cosmetics the following year and she also released a mobile app that reached number one on the iTunes App Store. In today’s day and age, she can be credited for being the most influential celebrity in the fashion industry. She has collaborated with celebrities like Rae Sremmund to be the face of clothing brands like PUMA and would release lines of products with big name companies. She’s been in the news more and more because of her relationship with rapper Travis Scott, with whom she has a daughter and the way she dolls her up as well with her fashion sense.

I like how Kylie has able to revolutionize the fashion world and build her own brand which is in such high demand. She capitalized on her fame and turned it into something for herself. Kylie has transformed into a business mogul and beauty icon by making contouring and bold lips popular for the masses. Her style and uniqueness are unmatchable.